Life and works: George Orwell, the pseudonym of Eric Arthur Blair, was born in Bengal but grew up in England and was educated at Eton.

From 1922 to 1927 he served with the Indian Police in Burma where he started to dislike class privilege, authority and English imperialism. This experience in the East is reflected in his first novel Burmese Days published in 1934.

When he returned to Europe he lived in poverty until the mid-1930’s when his financial position changed after the publication of Down and Out in Paris and London well received by the critics.

After his marriage in 1936 he increased his social commitment and was involved in the socialist party.

During the World War II he worked for the BBC. His most famous book, Animal Farm, appeared in 1945 and made the author internationally famous. He continued writing critical essays and articles for important newspapers, until he became very ill and finished Nineteen-Eighty-Four in 1949, shortly before he died of tuberculosis.

He considered himself as a socialist but was too attached to the principles of personal freedom to agree with Communism or with any totalitarian form of government and was concerned with the social and political problems of the poorest and weakest members of society.

Soon after the outbreak of the Civil War in Spain, he left for Barcellona and fought for the Republicans but he was wounded and forced to go back home. Homage to Catalonia (1938) is the account of his experiences in Spain. 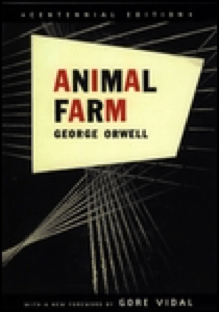 ANIMAL FARM is a satire on revolutionary Russia. lt is a fable that recounts how the animals, under the leadership of the pigs, revolt against their human masters.

After their victory, they decided to run the farm themselves on egalitarian principles.

But the pigs become corrupted by the power and establish a tyranny and – led by Napoleon (Stalin) – they take all the power and became dictators.

Snowball (Trotsky) the idealist, is driven out. The slogan of the new tyranny runs: ‘All animals are equal, but some animals are more equal than others’.

NINETEEN EIGHTY-FOUR had an immense impact for his subject matter.

lt deals with totalitarianism and the dangers it represents to humanity.

When the book came out, the world was coming out of the war against nazism and fascism and was coming to grips with the dictatorship of Stalin.

Winston Smith is the protagonist of the novel. He has a job in a ‘word factory’ working on the Newspeak language and ‘editing’ news.

The slogans ‘War is peace’, ‘Freedom is slavery’ and ‘Ignorance is strength’ are given out all day over the loudspeakers.

He desires privacy, humanity and honesty, but realizes that such thoughts are punished with the death penalty.

He begins a love affair (forbidden) and is arrested, tortured and brainwashed before being released totally submitted to the Police State’s will.

Use of language: Orwell was conscious of the way in which language can be used to hide the truth and how governments can use it to deceive the people. In his novel he describes a future world where every word and action is controlled by a State that is changing the language so that the only words left are those for objects and ideas that the government wants the people to know. According to Orwell, a government can control the language in order to control the people who use it.